Unlike The Tardis, The Shakespeare pub on Bethnal Green Road, is smaller on the inside than the outside might suggest.

A traditional East End public house. There are no frills, two flat screen TVs, one showing the racing and the other, this Saturday afternoon, football.

The Shakespeare, or The Shakes as it’s often called, is predominantly frequented by Tottenham Hotspur fans. Today it’s Southampton against Manchester City on the box and the punters are more interested in drinking and chatting than the match. Everyone turns to watch when something exciting like a goal, a near miss, or when a yellow card, better still a red, is shown. The live action missed, everyone catches and comments on the instant replay before turning back to their pint picking up conversations where they left off.

The Sky Football feed is not what it at first seems. The pub has it’s TV receiver dish aimed at a Saudi satellite and so the screen text, commentary and adverts are in fact in Arabic. It makes no difference as the sound is down and we listen to a CD featuring songs from the likes of Frank Sinatra, Elvis Presley and others. Horses race up one end of the bar, footballers kick down the other. The pictures are from Sky but the cost to the pub is much less.

I like The Shakespeare. It’s an honest drinking pub which wears it’s history proudly but without ceremony.

We sit nursing glasses of Ruddles at a table on the small raised stage by the pub’s front window.

The day passes into night with a draw and an odds on winner. 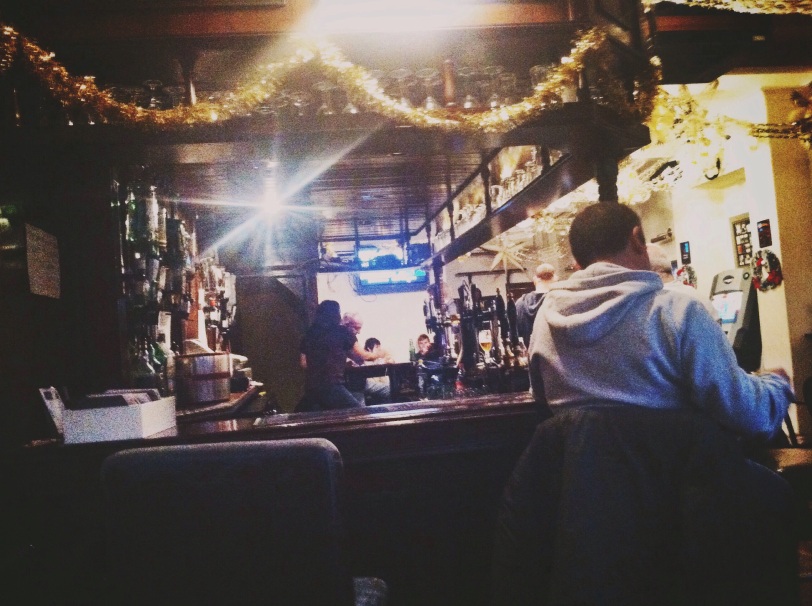