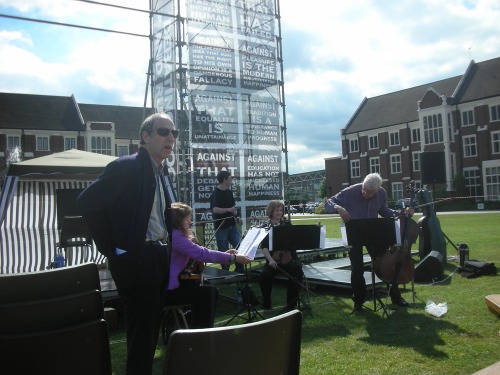 Invigilator spoke briefly with psychologist and one of the original developers of the psychic profiling of perpetrators of crime, David Canter, after his talk in the quad at RADAR Loughborough last year.

David’s talk given in an outdoor space rather than in a lecture theatre or hall was illustrated not with a PowerPoint but by a live string quartet playing sections from a piece composed by David himself that brought a different dimension to his words. This led INVIGILATOR to think a little and make moves towards a splacist manifesto on the use of PowerPoint slide shows:

Towards A Splacist Manifesto On The Use Of PowerPoint

We encourage all university lecturers, school teachers, business people and others to consign the PowerPoint presentation as most commonly currently used to the trash bin.

The only time these p(e)rveyors of usually seconhand thought should use PowerPoint presentations are when they use a previously unseen randomly downloaded PowerPoint slide show to illustrate whatever it is that they wish to pontificate on to their captive audience.

The use of dance, music, boxing or any other performative act is actively encouraged in place of PowerPoint presentations. Paul Conneally
May 2010