this man of Charnwood
brought up in The Potteries
clay, slip and spirit

The first time I met Les was during my Fruit Routes interventions with artist and long time collaborator Anne-Marie Culhane in June 2018. I asked him if he’d like to take part in our latest iteration of SKEP. He enthusiastically agreed and here he is wearing the Skep on his head, in fact becoming SKEP as he writes, draws. Here is what Les produced: 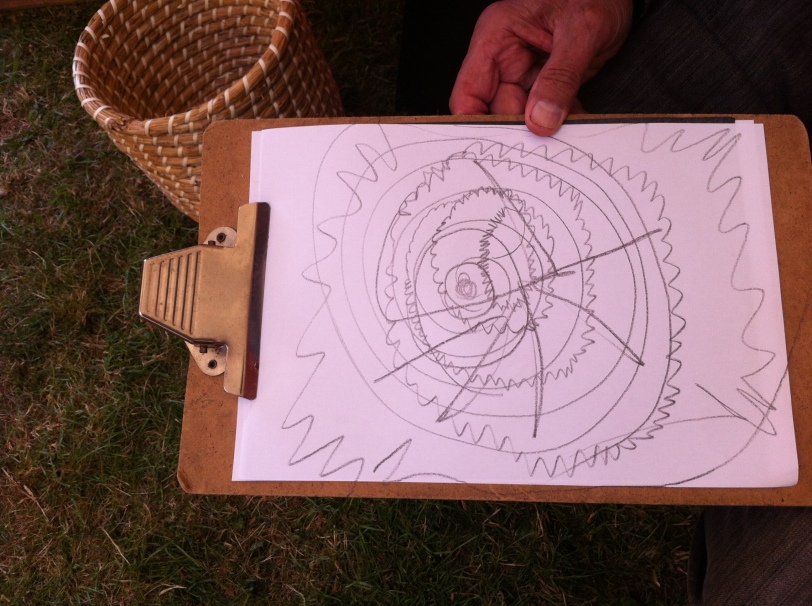 As part of our artistic practice, Anne-Marie Culhane and I are constantly looking for new ways to engage people with the many existing and emerging convoluted issues around food production, food systems, and foraging. Our works encourage people to examine how our actions as consumers, growers and producers of food affect the environment and our subsequent capacity to feed the world whilst at the same time protecting it, making it sustainable for future generations.

A skep is a traditional European beehive. For many hundreds of years, these structures, woven out of corn, willow and other plant materials, were the engines of honey production across the U.K. and Europe. Some are still used, but modern hives predominate. A skep will often still be used by beekeepers to collect swarms from people’s gardens or other public places. Honey is now produced along the Fruit Route at Loughborough University and sold to the public.

A participatory performance art piece, SKEP, reaches back in English folklore to a time when if someone in a village died or when there was conflict people would walk down to the beehives and tell their troubles to the bees. The bees also could help in taking the spirit of the dead from this life into another. The bees helped ‘crossovers’ take place, including perhaps the mediation of village, or personal and mental conflicts, too. Connecting with the concept of ‘hive mind’ is also central to SKEP.

During Fruit Routes, members of the public are invited to place a skep on their head and share the thoughts and images that come to them by writing and drawing, almost automatically, on a pieces of paper that they can only feel, not see. They are gently guided by the artists to place the skep on their head and to relax and then consider issues around food production, food systems, and climate change that they’ve met during their time at Fruit Routes but also any personal issues that rise in their mind, their now ‘hive mind’, as they sit, head enclosed in the woven straw beehive. They are encouraged to write or draw only when they feel spiritually moved to do so. Their writing and drawings are captured by the artists on a carbon copy of their pencilled scratchings below the paper that they actually write on. This carbon copy becomes overwritten with subsequent visitors to SKEP. The carbon copied overwritten paper becomes a record of the ‘hive mind’ thoughts and an artwork in itself. Each participant takes home with them their own writing, their thoughts conjured up by time in the hive.

Being inside the skep is at first strange, but also quietly comforting as the noise from people and surroundings becomes muted and you become aware of your breathing and thoughts.

Of the many people invited to participate in SKEP II only a few refused, feeling that they would feel too enclosed or even silly if they did so. Those that took the plunge and put the beehive on their head reported finding the experience disorienting and focussing at the same time, even comforting.

Watch out for new iterations of SKEP in an orchard, allotment, shopping centre, or gallery near you and put your head in the hive; you might just enjoy it!

Read more about Fruit Routes and SKEP here at FEAST