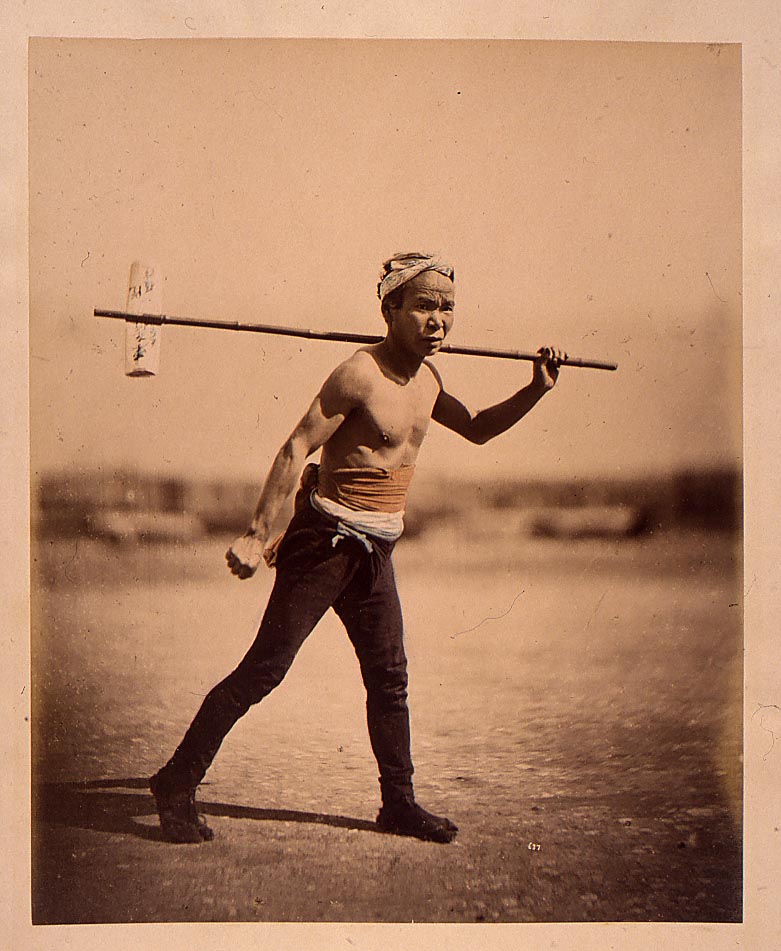 Hikyaku were couriers or messengers active in the medieval and early modern periods, who transported currency, letters, packages, and the like. In the Edo period, the network of hikyaku messengers expanded dramatically, and also became more organized and systematized.

Sando hikyaku (三度飛脚) traveled the Tôkaidô three times a month, and were generally employed by shogunate officials in Osaka and Kyoto to communicate with the shogunatein Edo. The messengers made use of horses made ready at post towns along the way – in theory, three horses ready and available at any given time – to ensure they would always have a fresh horse and thus the ability to travel more quickly.

The same term, sando hikyaku, was also used to refer to an independent network of messengers (i.e. not working directly for the shogunate) who operated commercially in transporting messages and goods along the Tôkaidô, beginning around 1664. These commercial messengers were also known as jô bikyaku in Edo, and junban hikyaku in Kyoto, and operated out of roughly 86 establishments in Kyoto and at least nine in Osaka, with branch operations in Edo, and roughly twenty post-stations along the route. A much smaller group of messenger operators, known as jôge hikyaku (上下飛脚) or rokkumi hikyaku (六組飛脚) were based in Edo, and specialized in transporting materials for provincial daimyô. The Kyoto/Osaka-based messengers soon expanded their business, establishing routes connecting those cities with Tanba and Harima provinces, and with major provincial cities such as Sendai, Nagasaki, Kanazawa, and Fukui. Each company ran on a different schedule, generally sending and receiving messengers three times every ten days; a manager called a sairyo oversaw operations and took responsibility for the safety of packages.

The shogunate also operated a network of messengers along all five major highways (the Gokaidô) called tsugi hikyaku (継飛脚), to convey official messages to shogunate and daimyô domains. Horses were kept ready at stations called tsugitate, spaced roughly eight kilometers apart, for use by the messengers.

Some of the most powerful daimyô maintained their own messenger networks, called daimyô hikyaku or shichi-ri-hikyaku, as these networks generally had horses ready every seven ri (shichi-ri). The two most prominent daimyô who maintained such networks were the Gosanke Tokugawa branch families based in Wakayama and Nagoya. Messengers in the service of Wakayama han left Edo on the 5th, 15th, and 25th of each month, and left Wakayama on the 10th, 20th, and 30th.

All in all, the time it took to convey messages from Osaka to Edo or vice versa, across 500 km, settled into a standard of six days by the end of the 17th century; in the 18th century, as the economy boomed and road and river traffic increased, delays due to congestion and other factors increased as well, and what once took six days now more frequently took ten or twelve. Meanwhile, however, commercial messenger services sought ways to cut down their times, and soon haya hikyaku (quick messengers) were making the journey in five, four, or as little as three and a half days, gaining time by running at night, and by making stops at fewer stations. In the 19th century, messengers somehow managed to cut the time even further, making the journey in as little as two days. However, these super express services were quite expensive, costing as much as four, or even eight or nine ryô for three-and-a-half day delivery of a message.