Involuntary Painting 1 New Parks : New York culminated with images of things identified as ‘involuntary paintings’ by members of the Creative New Parks group being incorporated into the fabric of the New Parks Centre Library. One of the pieces was a series of photographs of a kerb and tyre mark running up the road , St. Oswald’s Road, opposite the library, which were applied to the library front windows. Here’s one of the original images:

The community working with Conneally photocopied the tyre mark that had been discovered by Colin Murphy, a member of the group, and photographed on Conneally’s iPhone 4. They then put the photocopies together sticking them down on a roll of lining paper creating something that resembled Rauchenberg’s ‘Tire Print’

Above is ‘Tire Print’ a voluntary artwork by Robert Rauschenberg made with John Cage. Below is the group’s work drying in the library. 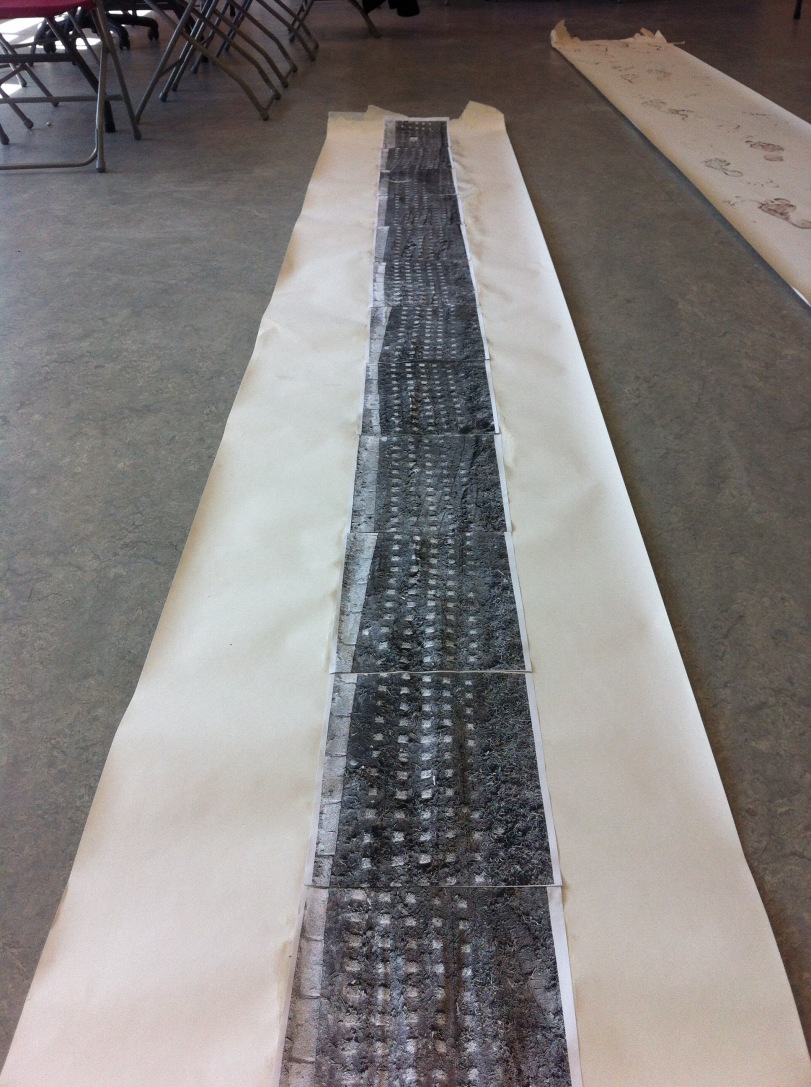 Vinyls of the original images were printed and made to measure the front windows of the library. These were apples to the windows by Conneally with Sally Norman of Soft Touch Arts who facilitated the whole project.

Note: The term ‘Involuntary Painting’ was first ‘invented’, coined and used in this context by Hughes to describe marks on objects, walls, buildings made by the weather, ageing, persons, animals, graffiti, abuse and other means, that he came across in his travels around New York, that seemed to him could be and were similar to modern paintings found in galleries and museums across the world.

Hughes, working with Conneally, developed the idea further, and together they came up with a simple way to describe what an involuntary painting was in the hope that by identifying and sharing such involuntary paintings they might encourage the reexamination of what painting is, has been and could be.

“Imagine that and alien lands on Earth programmed with all the knowledge of contemporary modern art but never having seen a painting. What might this alien mistake for a painting? These things, never intended as art, as paintings, are what we now propose as involuntary paintings” – Millree Hughes and Paul Conneally 2014